New Year is around the corner. Another eventful year has passed, and we have enjoyed it. Today is the most magical day of the year filled with warmth, kindness and new hopes, and we are happy to celebrate it with you.

Thank you for your continuous support. We work hard to make your game experience in Warface most enjoyable and fun. Your feedback guides the game development and leads us to new summits. Let the Christmas spirit reign the world tonight. Happy holidays!

During the celebrations, your efforts in Warface will be rewarded even better. Festive rates are already on, meaning that you can get more XP, VP, WF$ and Battle Pass XP. Have fun, level up faster and don't forget to give your best wishes to fellow gamers in Warface! We are happy to introduce new powerful and unique agent — learn more about his story below! Liu Fang rarely went outside, preferred to talk over the Internet, and led a secluded lifestyle. His family was supportive and understanding of the behavior of their son — a genius weirdo. From an early age, the boy demonstrated non-standard abilities in making inventions and was really interested in technology. As soon as he got a computer, Liu Fang plunged into the endless world of Internet technologies and robotics. He dreamed of creating his own artificial intelligence.

When the young man hacked into the servers of the industrial giant "Hitomi Industries", he received an invitation to work for a private Chinese military company, "White Lotus". White Lotus carried out an additional test of Liu Fang’s skills, offering to hack into the network of three of the world's largest corporations. The young man didn’t even have time to finish off a bag of his favorite chips when he had all the ins and outs of each of the corporations, down to the nicknames of the intern’s cats. Having entered into the ranks of the "White Lotus", Liu Fang got access to the most advanced technologies that he could only dream of.

The company provided the services of its technical geniuses anywhere in the world, so soon Liu Fang had to get out of his cozy digital world. Along with his computer skills, he also improved in physical training and even started using a weapon. Liu Fang considered rifles and similar weapons useless trash, preferring light submachine guns. Compact instruments of death, which resembled hacker attacks, were similarly fast, efficient and secretive. The queue for the services of this titan of the computer world is scheduled for years ahead, but exceptions do happen.

New achievements are also available - don't miss the chance to get them!

Complete the contracts and get your hands on new skin and a unique charm!

The winter season offers a new reworked Battle Pass, contracts for the "Snowstorm" gear, four new weapon models and a weapon series that are already available in the Battle Pass! 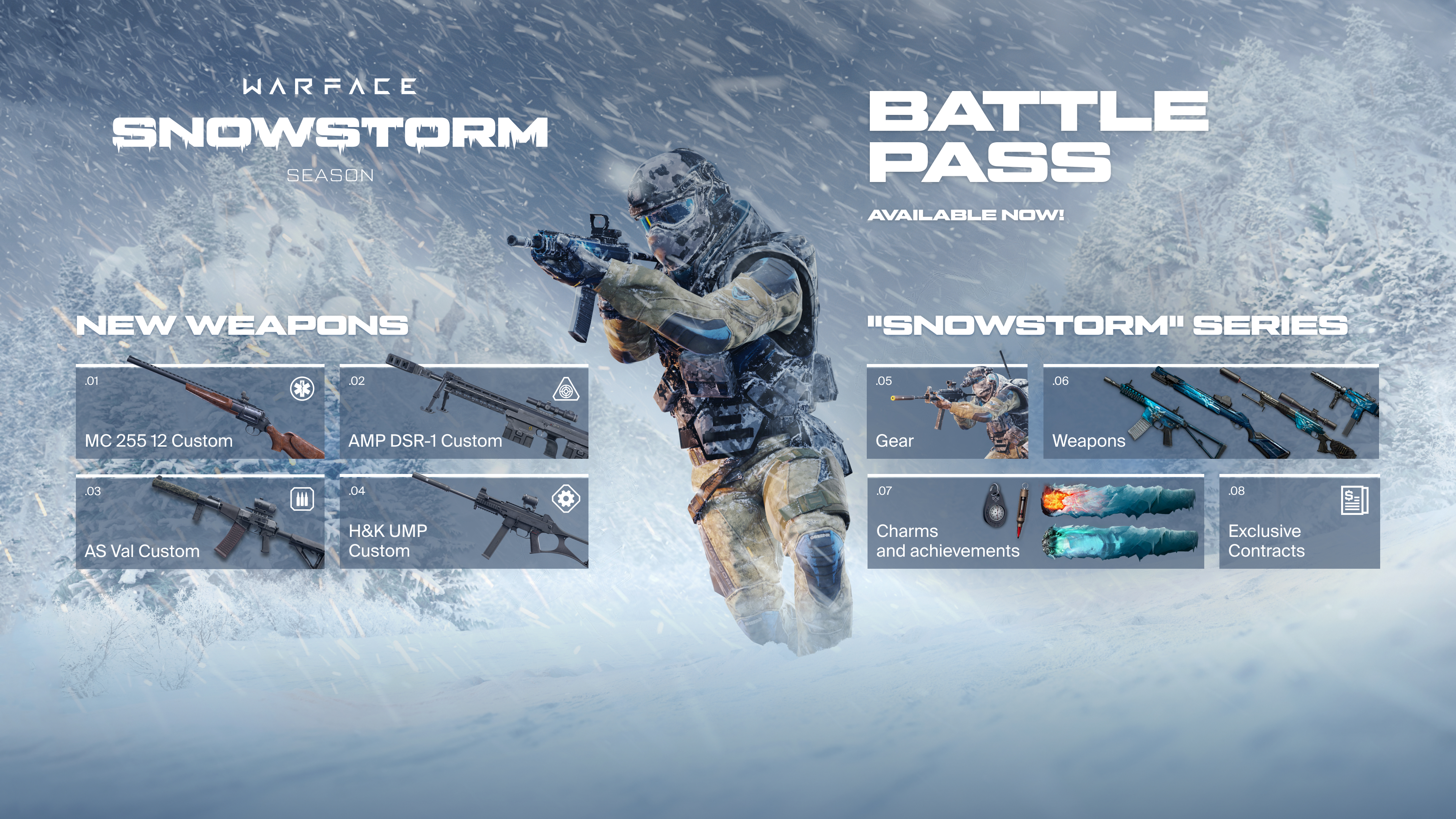 First of all, we tried to make it easier to start the Battle Pass and speed up the progress at the initial stage. Now, you can reach level 30 and open contracts much faster.

Show your skill - participate in the fragmovie contest! Join our official Discord server, post your entry in the #contest channel for a chance to win a shop weapon of choice and 5000 Crowns. Festive giveaways will take place on our official Discord server.

You are most welcome to join in the fun. Stay tuned to receive cool items from our generous Santa! Enjoy Crossplay and Increased Rates!
Celebrate the launch of crossplay on Nintendo Switch with increased rewards!
2021-06-11 12:09:00