We conduct regular surveys, aiming to gather your feedback and fine-tune the game development to make your gaming experience more comfortable and exciting. Recently, we have seen a lot of feedback regarding Aim Assist in the game: some players thought it was too strong, while others thought that it was not working properly. Thus, we carried out a survey on our Discord server, and we are grateful to everyone who took part in it and shared their thoughts. Even though some of the reactions were obvious, we still found out some new details and managed to reach more players than usual. We have thoroughly studied the feedback, and are ready to share the results with you

Let’s start with some numbers: 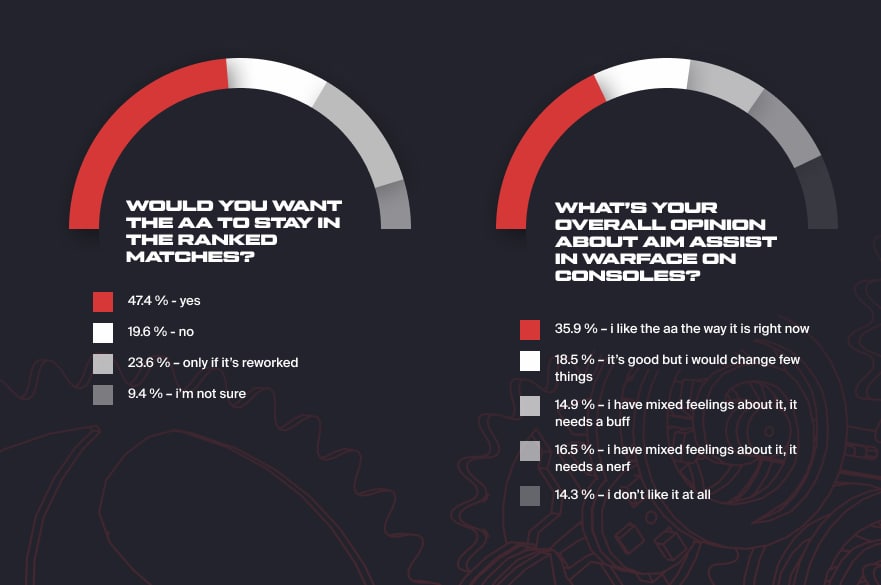 Aim Assist is one of the most complex in-game mechanics at the moment. It considers a lot of parameters, and every minor change into the code can have a great impact on someone’s gaming experience. From what we've gathered, 71% of players would like to see AA in the Ranked Matches.

We see all the feedback players share on our social media pages, however, we need to analyze various aspects of the game in order to make a decision regarding a complex system like aim assist. Another important point is that we’ve already tried turning AA off in RM and we’ve seen quite the opposite: lots of players were actively asking to turn it on. We made some tweaks and did as players asked us to do. At the moment we are not ready to remove aim assist from ranked matches, but we are willing to make is more comfortable for our players, and this is the reason why we asked you to take part in this survey.

All the opinions and reviews mentioned above are already forwarded to the development team and will be considered while reworking the system. That is why we encourage you to share more videos of the situations where the way aim assist works leaves much to be desired or needs some tweaks. All the opinions and suggestions will be forwarded as well.

We are extremely grateful to everyone who took part in this survey — your opinion really matters to us! The second Battle Pass season is already in game!
Unique weapons, achievements and camos await the bravest fighters in the new Battle Pass!
2020-06-09 15:58:26